I've received notice that the universal link is not working correctly. Please use these updated links: 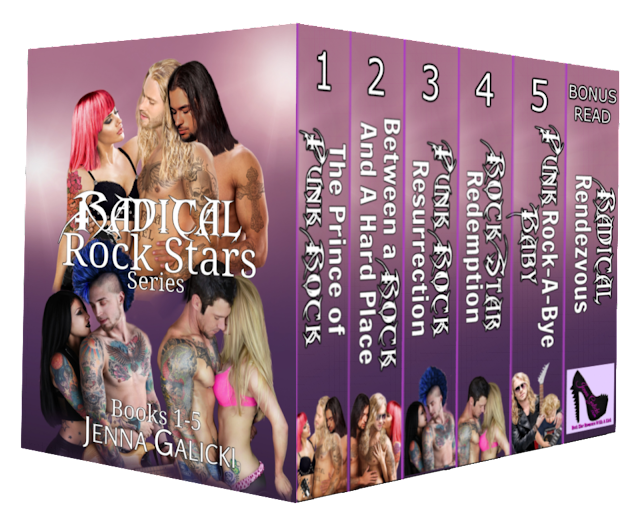 Blurb:
Get Ready to Rock! This five-book collection is filled with hot rockers and tough chicks all wrapped up in a ton of angst and heat.
In this award winning series, follow Immortal Angel as they rise from Brooklyn garage band to become one of the biggest punk rock sensations in America.
Whether you love a heartthrob, a damaged soul, a playboy or a romantic, these rockers and the women who love them will leave a mark on your heart that will have you thinking about them for a long time to come.
The Prince of Punk Rock, Book 1 – Finalist, 2015 Bisexual Book Awards. Winner, Angel, Tommy & Jessi, Saints & Sinners Couples Battle. Winner, Jessi Blade, Best Rocker Babe.
I love her, but I also love him.
She’s everything to me.
He sets my world on fire.
It's our dirty little secret, and it’s about to blow our record deal sky high.
I’m Tommy Blade, the Prince of Punk Rock, and this is our story.
Between A Rock and A Hard Place, Book 2
She’s a rock goddess.
He’s a sex pistol.
I need them both, in my life and in my bed, and I’m not living without either one of them.
I’ll do whatever it takes, even if it costs me everything I’ve ever wanted.
I’m Tommy Blade, The Prince of Punk Rock, and this is the continuation of our story.
Punk Rock Resurrection, Book 3
This is a dark tale of loneliness and self-worth, and how the love of a woman can change a man.
My world was dark and filled with pain.
Loneliness gnawed at my soul.
I found solace in a bottle.
Music was my only refuge . . . until I met her.
She was a dark Gothic goddess in thigh-high leather boots.
She brought light into my life and showed me what it was like to be loved.
But could she handle the demons that haunted me . . . and the vices that kept them at bay?
This is the one everyone’s been waiting for. This is Damien and Alyssa’s story.
Rock Star Redemption, Book 4
I live life in the fast lane.
My days and nights are a never-ending party of women, fast cars and alcohol.
I'm the one your daddy warned you about.
I have everything I ever wanted—except Audra Abelman.
She was always the good girl.
She was off limits.
I held out for almost a decade.
It's time to set her inner bad girl free.
I'm Jimmy Wilder, and I'm going to claim the most sought-after girl in the record industry.
Bonus Read!
Radical Rendezvous – an erotic short
Punk Rock-A-Bye Baby, Book 5
Revisit our original trio and follow up with the evolution of Angel, Tommy & Jessi’s
relationship.  Time only makes this trio burn hotter!
She rocks my world.
He sets my soul on fire.
We’ve traveled down a bumpy road, but we’ve finally found the balance.
It’s time to bring a new little rock star into our lives.
I’m Tommy Blade, the Prince of Punk Rock, and this is the next chapter in our story.
Other Books in the Radical Rock Stars Series:
The Stage, Book 6 (an Immortal Angel/Bulletproof crossover novella)
The Roadie, Book 7 (Coming Summer 2020)
DON'T MISS THE NEXT GENERATION OF ROCK STARS!
The progeny of legendary punk rock band Immortal Angel brings you an enemies-to-lovers and friends-to-lovers duet.
LUCAS BLADE, Radical Rock Stars Next Generation Duet Book 1
He’s the son of guitar legend, Tommy Blade. He’s smart. He’s gorgeous. He’s talented beyond belief. He’s perfect. And he knows it. He’s also giving me the opportunity of a lifetime. He’s trying to teach me his wisdom, but I just want to play music. He’s so damn confident and self-assured it makes me crazy. He’s also breaking through all of my barriers.
MASON WILDER, Radical Rock Stars Next Generation Duet Book 2
She’s my best friend’s little sister. She’s off limits. I’ve known her since the day she was born, but it’s taken me 22 years to realize how much I love her. Just when everything seems perfect, my world gets turned upside down, and I need to take sides between people I’ve loved and trusted my entire life, and someone I never thought I’d see again.
NOW LIVE! 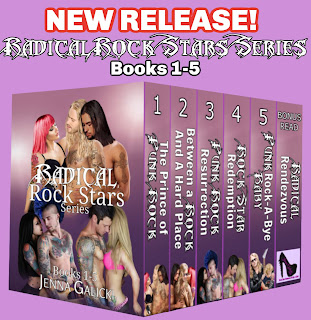 Praise for The Radical Rock Stars series:
"The Prince of Punk is one smoking hot rock and roll fantasy where the boy gets everything he ever wanted - a hot wife, a hot boyfriend and a hot band playing sold out venues." ~ Kindle Crack Book Reviews
"...racy, hot filled with fury...From love to hatred, from peace to turbulence...I could almost see it happening on the big screen." ~ Adriana LG "L.A.N.G."
"…mesmorising, unputdownable and exhausting - but SO worth it. . .Stunning."  ~ Wicked Reads Team
"Crazy writing and reading at its best...I loved it."  ~ Wicked Reads Team
"This book was just heart wrenching. The emotional roller coaster all of the characters go through was almost more than I could take."  ~ Jodie's W.I.N.E. List
"Jenna Galicki gives us a scorching hot romance . . . Ms. Galicki doesn't hold back and gives us the gritty lows as well as the highs."  ~ Illustrious Illusions 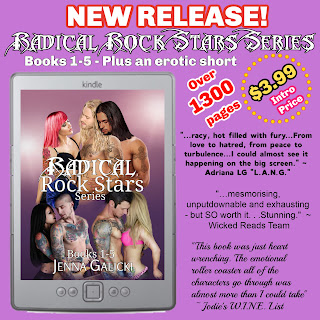 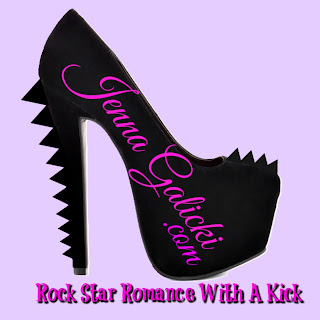 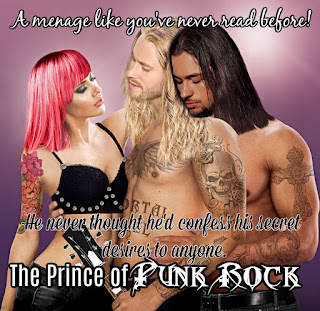 Excerpt #1: The Prince of Punk Rock, Book 1
Jessi let the warm water from the shower spray onto her face.  She was happy.  Tommy was happy.  Angel was happy.  Their much-needed talk at the breakfast table set some ground rules.  Angel was open to communication and encouraged it.  It gave her comfort.
After she showered, she meandered back to the bedroom, as she towel dried her hair.  Tommy and Angel were already naked and in each other’s arms on top of the unmade bed.
“What took you so long?” Tommy asked, before returning his lips to Angel’s neck.
Jessi didn’t answer.  She wanted to watch.  She leaned against the doorway and folded her arms.  She watched Tommy kiss Angel with an urgency that she never saw before, and the love that Angel had for Tommy was never clearer to the naked eye than it was right now.  She knew they were in love.  It didn’t scare her as much as she thought it would. The confidence she had in their marriage overshadowed her fears and doubts.
Her thoughts were pushed aside by the sound of Tommy moaning and breathing heavily.  Angel was stroking Tommy and nibbling on his neck.  Jessi let the towel around her body drop to the floor and crawled into bed, on the other side of Tommy.  She glided her hand up his back and kissed his shoulder.  He immediately turned onto his back, so that he could share himself equally between her and Angel, and he kissed her.  Her mouth moved to his chest, and she could feel his heart gently beating underneath her lips. She kissed her way down his torso and her tongue crawled across his skin.  It accidentally collided with Angel’s mouth.  They both looked up in surprise and shared a smile.
She wasn’t sure what Angel was thinking, but she wanted to kiss him.  Fear of rejection made her hesitate, but it was unwarranted.  Angel grabbed her by the back of the neck and firmly planted his mouth on hers.  His tongue invaded her mouth and bathed its circumference.  She was spellbound by the intensity of his kiss.  She couldn’t think about anything else except Angel’s warm, authoritative tongue inside her mouth, and she immediately felt warmth and wetness between her legs.  Now she understood why Tommy had that dreamy look on his face whenever Angel kissed him.
Angel withdrew his tongue, but she wanted more and placed a long kiss on his lips, hoping for another visit from his magical tongue.  But he just smiled at her, and then moved his mouth back down to Tommy’s belly.
Tommy pulled her up and kissed her.  It was like night and day.  Angel’s kiss was forceful and commanding.  Tommy’s was slow and soft.  She loved the tenderness in which he slowly moved his tongue in gentle, purposeful circles around her mouth, but she found herself still reminiscing over the kiss she just shared with Angel. 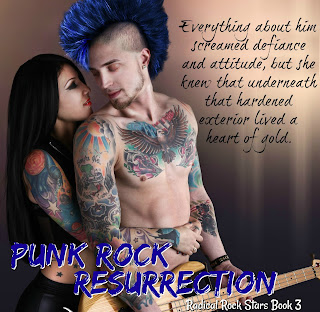 Excerpt #2: Punk Rock Resurrection, Book 3
Alyssa held up her shot, and Damien held up his half-full tumbler. She clinked his glass.  “That’s a pretty big shot you got there.”
“Big is an understatement. I like to use the term huge. And impressive.”
She laughed. “Oh really? Don’t set yourself up for failure”
His eyes never left hers as he took a big swig of his glass. “Don’t take my word for it. You can judge for yourself.”
She folded her arms across her chest and stared back at him with a smile pressed into her plump, crimson lips.
He finally silenced her. “What’s wrong? No comeback? No witty retort?”
“I have plenty of witty comebacks. I’m just not sure how far I want to take this tonight.” She was enjoying watching him squirm.
He took another gulp of his drink, while hers remained untouched on the bar. “I thought you wanted that shot. Can’t handle the hard stuff after all, huh?”  He placed his empty glass on the bar and taunted her with a smile. “I bet that hard-ass exterior is really just a front. Underneath it all, I bet you’re just a girly-girl.”
Her eyes opened wide, and her face went blank. For a minute Damien thought he went too far and pissed her off. He was about to apologize, but she picked up the shot glass and drained it, then slammed it down on the bar. She grabbed his shirt and pulled him so close he felt her breath on his lips. “I’m an expert at dishing out the hard stuff. I wield a needle for a living and pierce it through raw flesh without an anesthetic. The question is, can you handle it?”
Her self-righteous smirk mocked him with playful satisfaction, but Damien was about to keel over from the overwhelming heat that covered his body. Tiny dots of perspiration broke out on his forehead, and he was starting to think that maybe she was right—he couldn’t handle her in the bedroom. Had he finally met his match? Could this gorgeous, ferocious woman break him? Could she be the one to make him surrender and beg for mercy?
“What’s the matter? You look a little stunned. Did I scare you?”
“Hell no.” He stepped closer. “You got me excited.” 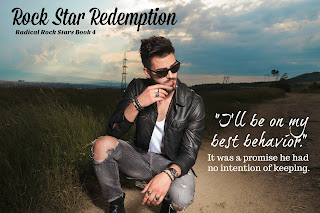 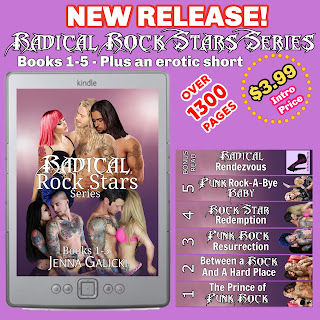